These action packed days of summer seem to fly by, but I've managed to gather up a bit of new and interesting stuff since last time.  As this post title hints at, I've got some randomness to share with you.  And a few new pieces of jewelry too!

First, how about some blog news...

Petra is having a fun giveaway over on her blog .  Easy-peasy entry.  All you have to do is share a joke in your comment.  You know there's some good ones.  Even if you don't have one, they're fun to check out.  And once you see her giveaway prizes, trust me, you're going to find a joke to share.  I wrote two!

A little shameless promoting here.  Last post I mentioned Ellice's new blog, Enlightened Lotus Wellness .  What I didn't mention is that Ellice is my daughter and this is her new blog.  Or you can go to Enlightened Lotus Wellness .  Actually there are two.  One is a blogger powered blog for those of you who prefer that, and the other one isn't.   She's just graduated with a degree in Alternative Medicine and is already putting what she's learned to good use.  She's written some fabulous posts chock full of helpful and heathful info.   Please visit, if you're so inclined and give my girl some blog love.  And for those of you who like to cook, recipes.  She's got recipes on there!  That's right,  I'm still trying to figure that one out.  She likes to cook?  Huh?  (I remember giving birth to her but......recipes????)

There's a new Etsy store you'll all want to check out.  The amazingly talented Tracy of pipnmolly has an equally talented sister, Robin who has just opened her own store,  RobinCheungArt .  She's got Pompeiian vases in shades of aqua and red on beautiful cards that you all know I want!

Lookee there on my sidebar...see that new button?  The one that says "Follow me on Pinterest".  What a blast!  It all started with FlotsamTide  Kim.  Really, it's mostly her fault.  She sent me a link to her Pinterest.  GORGEOUS! Then Joren showed me her Pinterest (page, boards, thingy?) and said "here's how you do it"........well you can see for yourself what that led to.  I have discovered that Pinterest is therapuetic.  If you feel stressed, instead of eating ice cream, go pinning.  If you feel exhausted, instead of eating ice cream, go pinning.  If you feel deleriously happy, instead of eating ice cream, go pinning.  You get the idea...just do it- go pinning! And my apologies to those whose  boards I repinned ALOT.  I've been told that it is in fact,  not rude, but is actually a good thing.  Right?  (and my health-conscious daughter is glad to hear I'm cooling it with the ice cream.  It's a summer thing)

And for you, my dear blog commenters.  I love reading your comments.  But sadly, I do not love reading the payday loans comments that they have decided they need to add to all my blog posts anonymously. It's totally bugging me, so sadly, I have reinstated the annoying "prove you're not a robot" feature to my comment settings.  Since obviously, this one particularly smart robot hasn't had to prove a thing and decided to stalk my blog.  ugh.  Sorry about that guys.  (update, nevermind.....I just went in and changed it back. we'll see how obnoxious it gets)

ok, well here's an interesting one for you....I looked out my kitchen window one day and saw something that was Venetian blue (eeekkk) floating in the bird bath.  hmmmmmm.  Must admit, I was wondering if someone was messing with me, but no...... 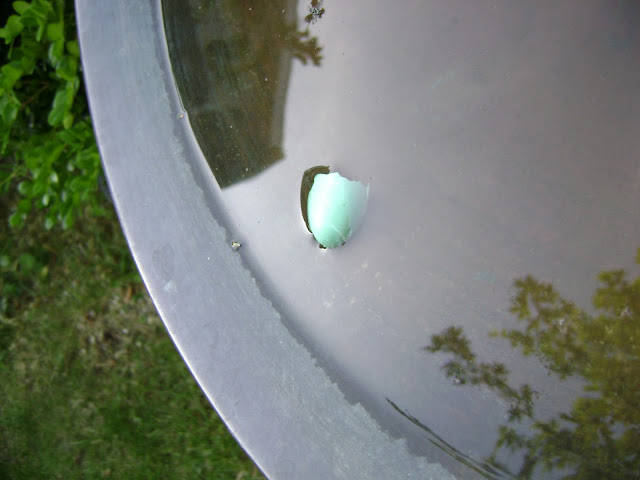 A robin decided to give me it's baby's egg after it hatched.
awwwwww.
and washed it too!

I made up a couple pairs of earrings from some of the beads and from the Roman glass that I got at the Bead and Button show.
My work takes on a whole different look
when I'm trying not to make a huge mess with metalworking.
So basically what I've done lately is some assembling, which resulted in this......... 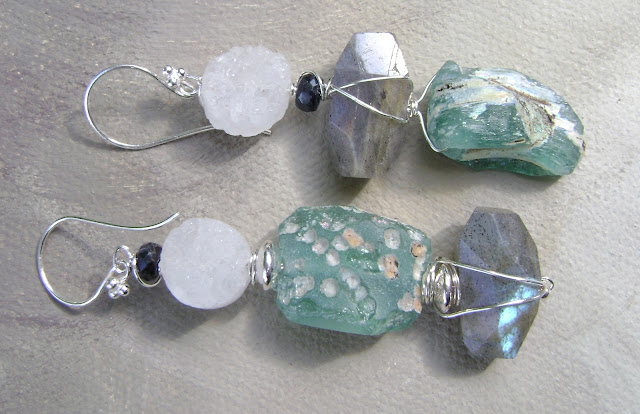 Here we've got not only the Roman glass, but also dazzling labradorite,
sparkling white druzy and amazing BLACK SAPPHIRES!
Impossible to capture the irredescence of the glass, no matter what I did. 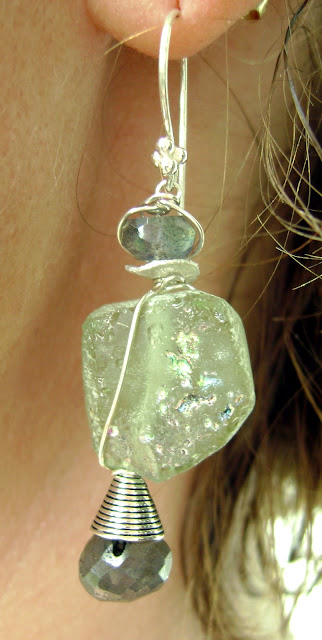 Captured Time
Green Roman glass, onion cut Labradorite and faceted Labradorite with sterling,
modeled by the lovely Melissa, a friend and the one who tames this wild mess I call my hair.  I mean the one who makes my beautiful curly tresses even more beautiful.
That's what I meant.

Not what you guys envisioned for the Roman glass?  Never fear, something more dramatic will be coming around the bend.  I've got big plans for that glass.

Here's something big and not the least bit subdued...... 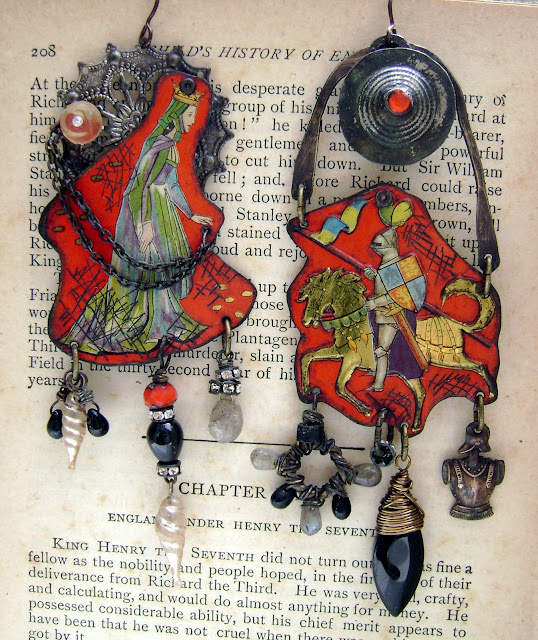 I Ride For You M'Lady

My homage to the times long ago when gallant knight's tried to win the hand of the fair maiden by being numero uno at the jousting competition.  I can't resist the whole romantic mumbo-jumbo surrounding the feats of daring of that time period.
The suits of armor, the coat of arms, the jeweled tiaras.
Delicious!  hmmm another food reference.  Possibly, I should have eaten something before beginning to write this post..  hmmmm, I wonder if I have some ice cream...... 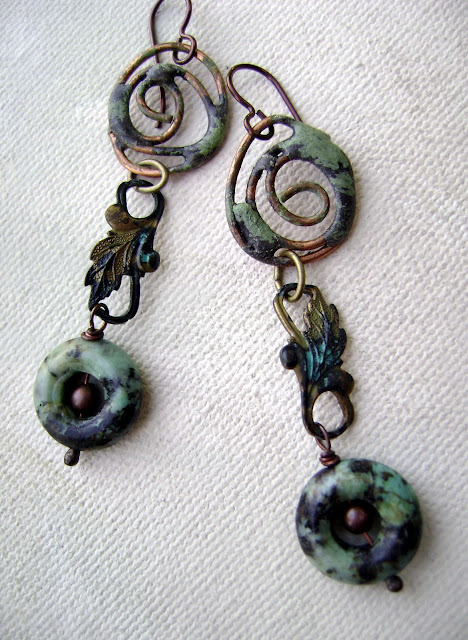 Three types, colors, varieties of verdigris.
Explained in further detail in the already done listing, just in case you're interested! 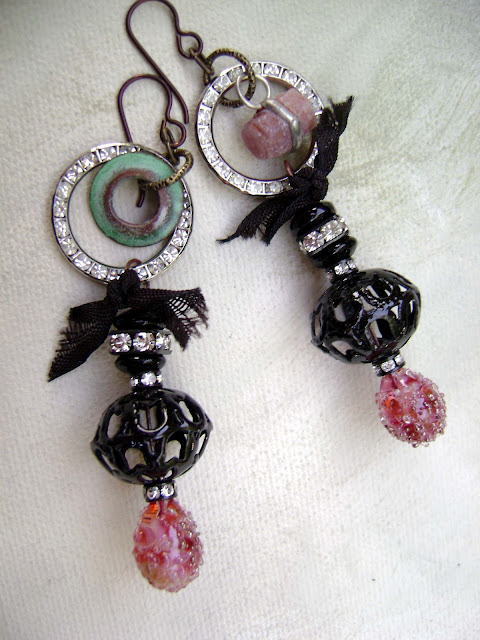 The Edgy Romantic Goes Dancing
(the dancing thing again!  hahahaha)
The black filigree beads are some steel ones that I got at the show and then enameled. There's a raw ruby, some sparkly headpins from havana beads , vintage rhinestone wreaths, rhinestone rondels, snippets of rayon ribbon in chocolate brown, and a touch of verdigris, of course.
A bit of rocker elegance. 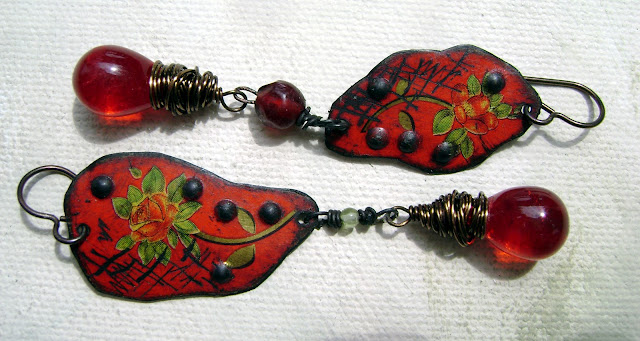 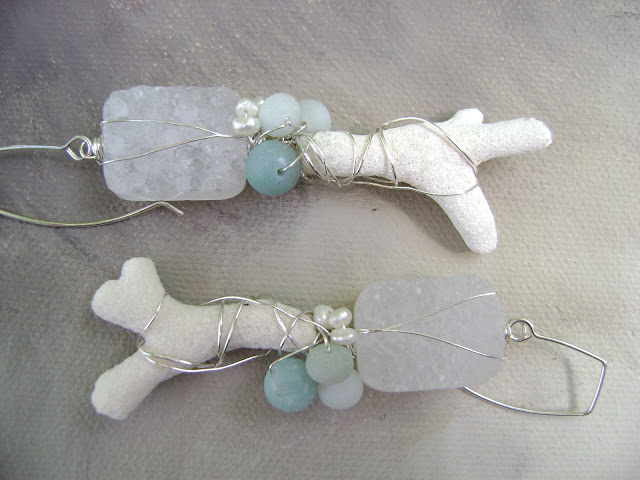 Treasures of the Seashore

Made from treasures from the Bead and Button show.
Druzy, matte amazonite, itty bitty freshwater pearls and coral. 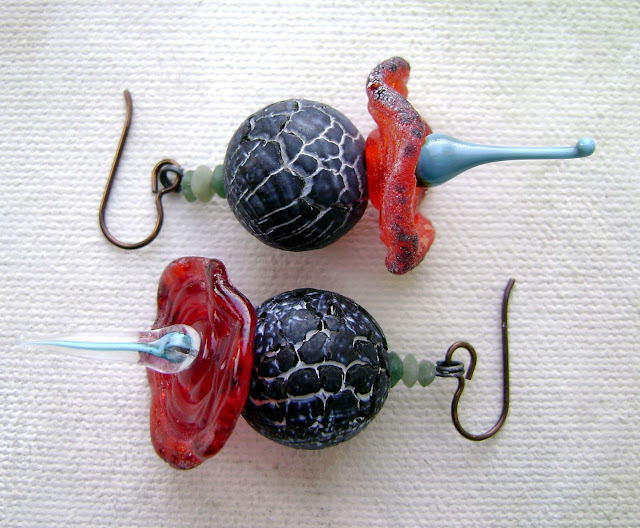 Dark Side of the Moon

Some of those crackled black beads from the show, intentionally mismatched glass; gorgeous red criffles from numinosity beads and cool spiky headpins from nadin art glass .
This is how they look when worn 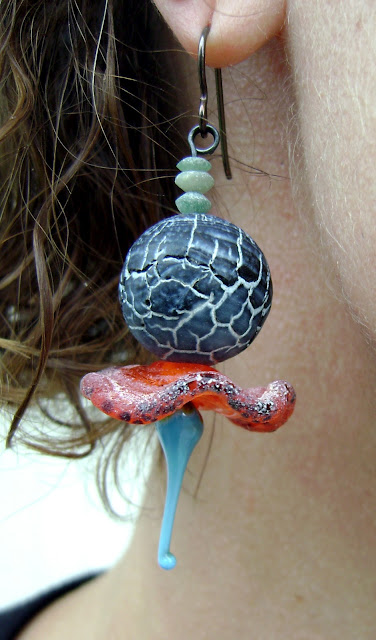 prepare yourselves for more COLOR! 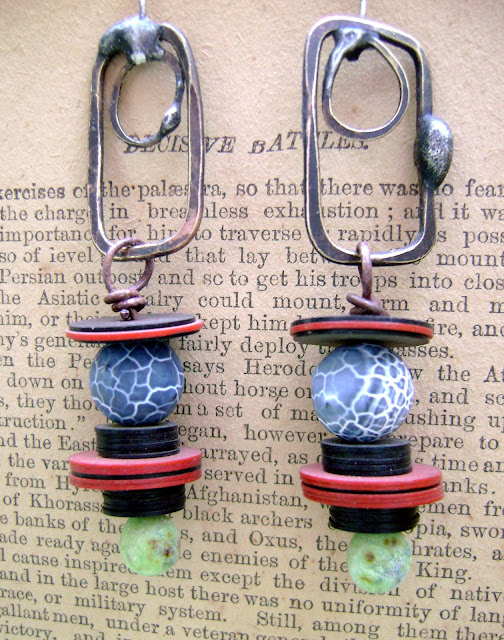 Colors of the Street Market
Soldered mixed metals with record vinyl beads, blue crackled stone beads and
crustified lime green headpins from Numinosity.
Now it's coming back to you, eh?  When I went Numinosity crazy a while back. 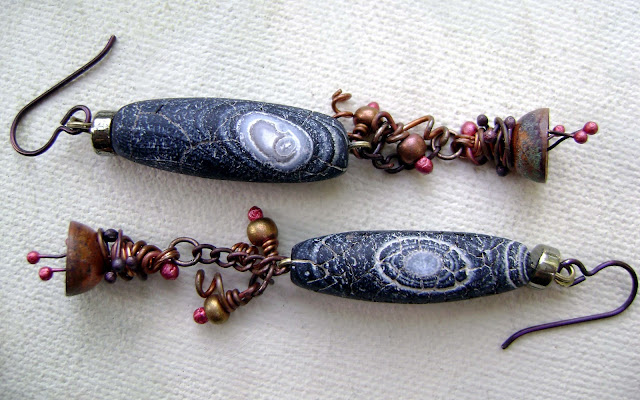 Stone beads with fabulous patterns that look to me, just like swirling galaxies with metal bits that continue the effect of the swirling movement.  Already sold. 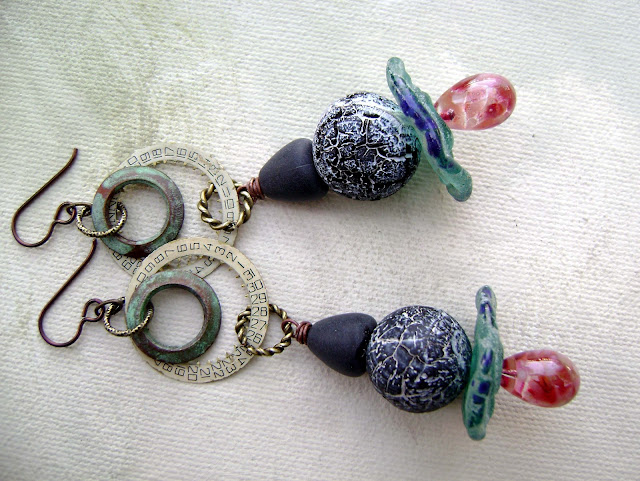 The Circle of Time 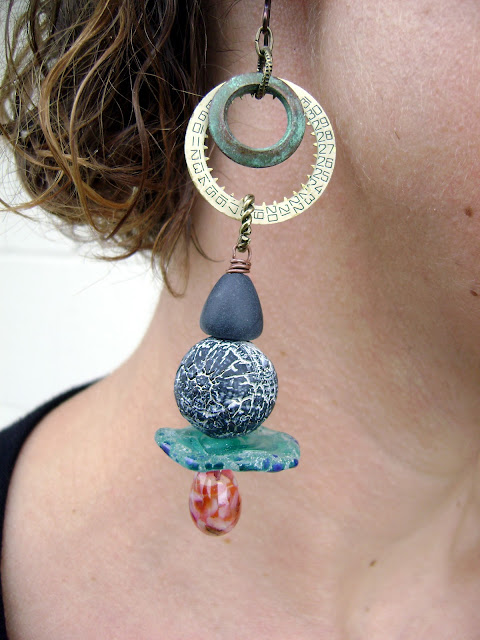 Yup, that Melissa is a good sport.  74 pairs of earrings later......hahahahaha 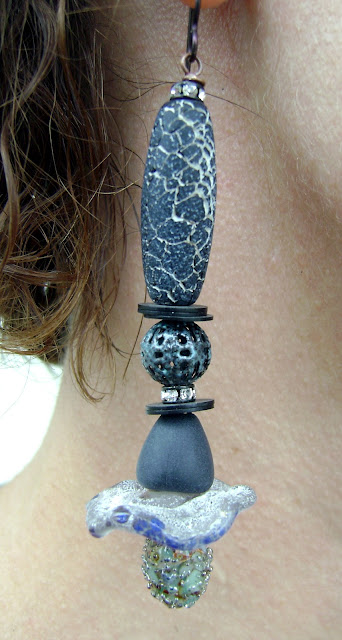 Yes, I have a theme.
Crackled beads, criffles, lampworked headpins.
But didya notice this pair has venetian blue enameled steel beads?
Betcha didn't notice that, did you, as you were yawning over another pair of
crackled stone bead earrings?  Hey give a girl a break.
I'm in assembling mode here.
And there's those spiffy sparkly rhinestones in there too.
See they aren't alike at all.

You've seen these before but finally they got listed..... 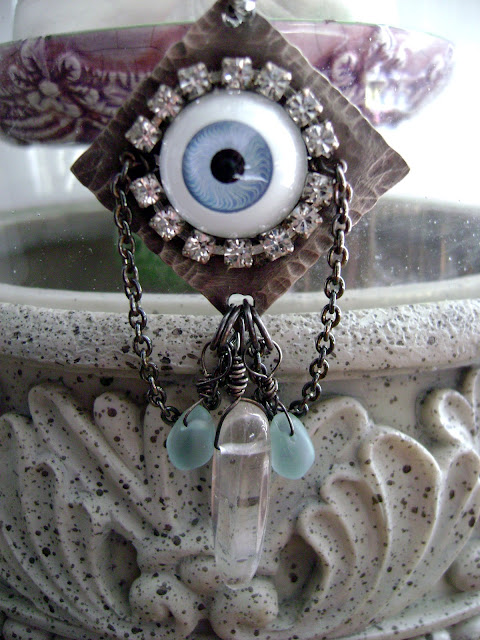 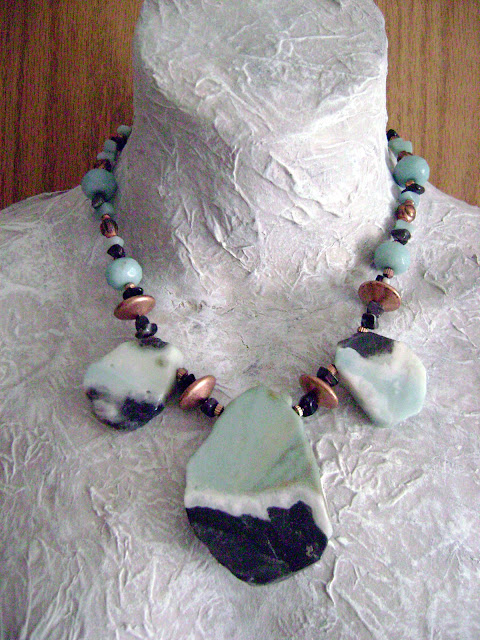 Queen of the Amazons.
Slabs of amazonite with onyx and copper. 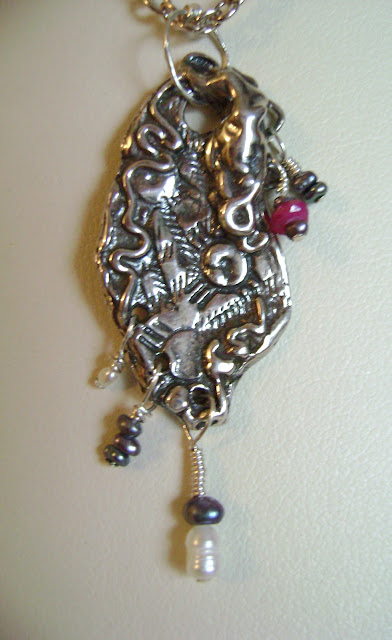 Torch fired fine silver with itty bitty freshwater pearls and
a wee facted ruby.
I'm kind of loving this piece.  It might get delisted.

and I'm still working on grunging these up... 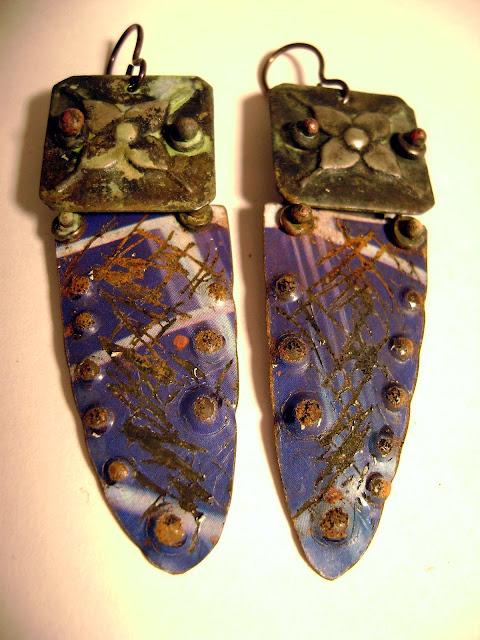 didn't like this any better. so I did this... 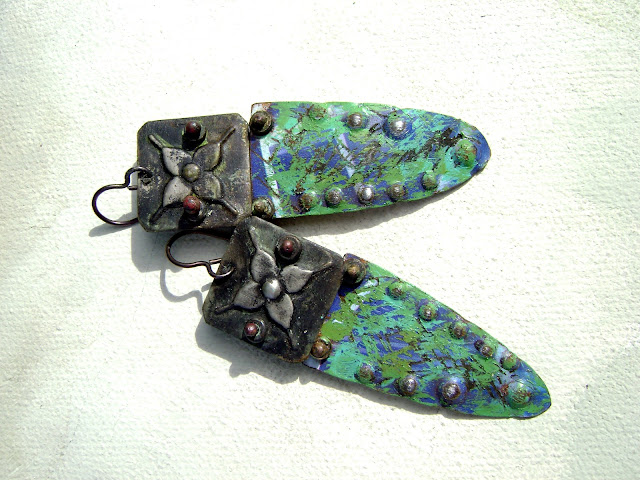 now they're too bright and need grunged up more.
The never ending Turkoman Goes Modern earrings project.
They'll have so many layers on them before I'm done, that
they won't qualify as lightweight anymore.
Hahahahaha 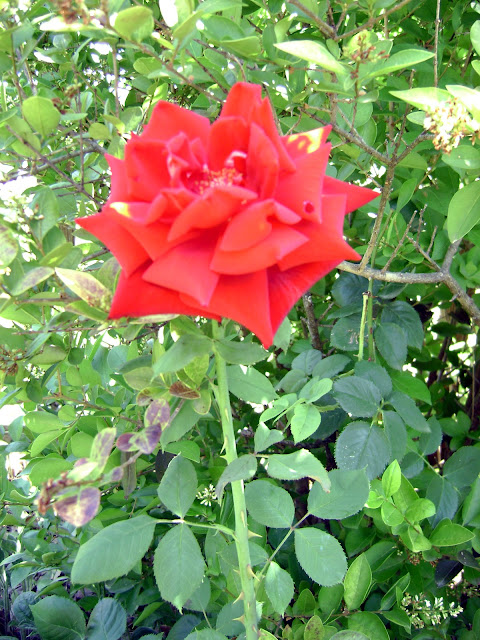 a single long stem rose.
A gift from a friend.
Each year, we get the one lovely, single bloom. 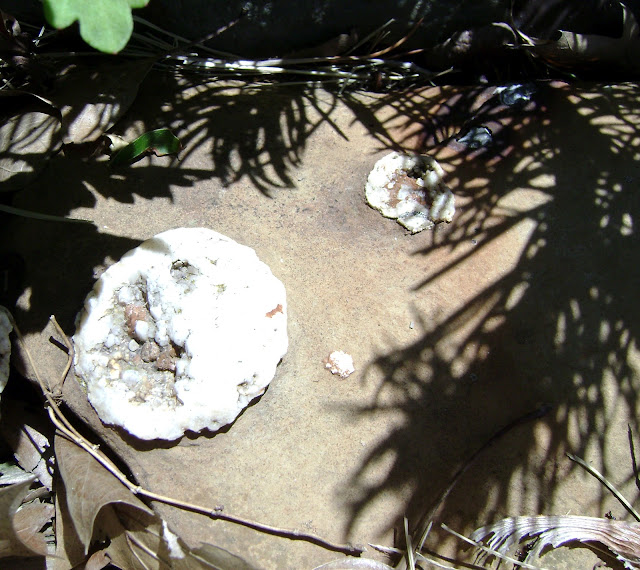 and now a random rock from a canoe trip, with crustified criffles growing on it.
Check that out, Kim!  Naturally occuring criffles!

So that's the sum of the bits. 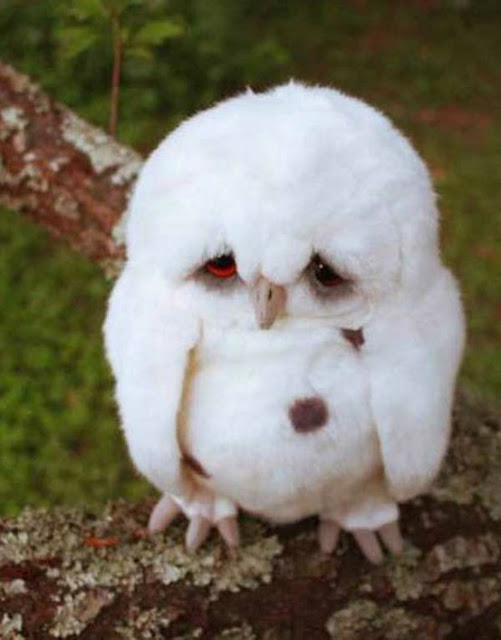 He looks like that cuz he just realized there's no more ice cream.
I know how he feels.

Hope you're all having a wonderful summer so far!

I love to hear what you have to say. Thanks for taking the time to leave a comment. 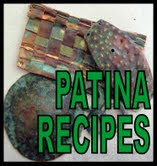 For studio updates and to see when new work is available...

The River gives up it's Treasure

Dancing By Firelight Under the Summer Moon

The Better To See You With, My Dear

Lace of the Desert